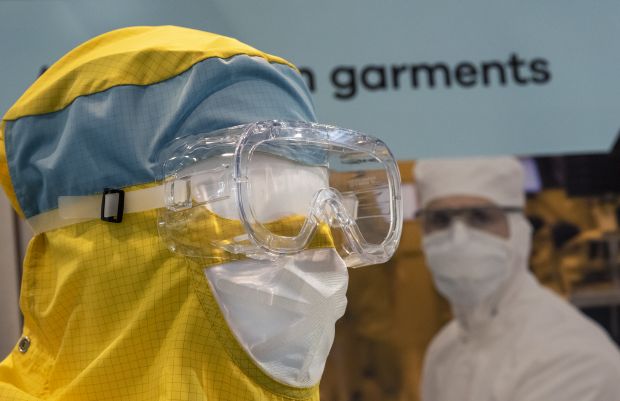 GERMANY, Frankfurt am Main. Digitalisation, production efficiency and the use of robot technology: On 19 and 20 November in Frankfurt am Main, Cleanzone 2019 showcased innovations for controlling contamination hazards in high-tech production.


From airlock entry to packing, 80 providers were on hand to present pioneering solutions for the full scope of complex material flows in cleanrooms.

Automation solutions designed to make cleanroom processes run more smoothly were in great demand, as were monitoring systems covering the entire production process in real time to ensure effective contamination control. Plant engineering was a major focus at Cleanzone 2019, with the industry’s market leaders sharing expertise on modular and flexible cleanroom systems. Visitors were able to gain even more information on issues such as dealing with nanoparticles, new materials and resource efficiency at the Cleanzone Conference, which was supported by the three most important organisations representing the interests of the cleanroom industry for the first time this year: the German Cleanroom Institute (DRRI), the Association of German Engineers (VDI) and the International Confederation of Contamination Control Societies (ICCCS).

At the Cleanzone Campus, research institutes and universities presented their latest projects dealing with such topics as airflow simulations, calibrating measuring equipment, and developing optimum airflows for hot processes like injection moulding.

One of the highlights was the Cleanzone Award, which was presented by Messe Frankfurt and the publisher Wiley-Verlag with its ReinRaumTechnik trade journal for the first time in 2019. From the eight exciting innovations that were finalists for the award, trade fair visitors chose the Friedrich Sailer company as the winner of the 2019 Cleanzone Award, which comes with €3,000 in prize money.

Wolfgang Marzin, President and Chief Executive Officer of Messe Frankfurt: “Cleanzone demonstrated yet again in 2019 that it is the industry’s international forum for innovation. Providers and users of cleanroom technology from every discipline and an array of countries once again came to the trade fair to network and share ideas.”

Most of the trade visitors came from the pharmaceuticals, microelectronics and biotechnology industries, and there were representatives from numerous companies at the trade fair, including Novartis, Nestlé, Bosch, Boehringer Ingelheim, Carl Zeiss, Trumpf Lasersystems and Sanofi Aventis, as well as various university hospitals.