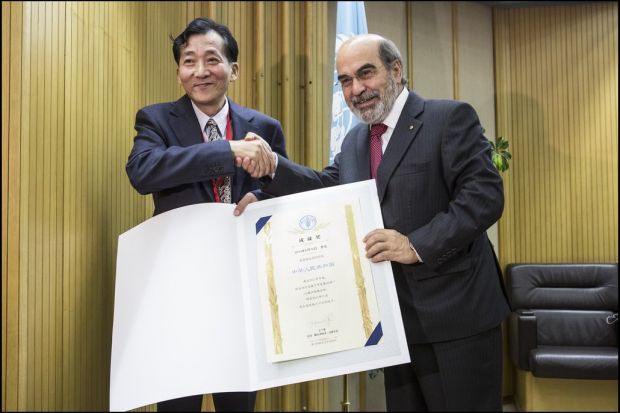 China was one of the countries honoured this week by the United Nations' Food and Agriculture Organisation (FAO) for having halved the proportion of its hungry citizens since 1990.

This achievement sees China joining a growing group of countries to have reached international targets ahead of an end-of-2015 deadline.

The MDG-1 target was established by the international community at the UN General Assembly in 2000. Forty countries have now achieved the MDG-1 while of these, 19 have achieved the World Food Summit target of halving the number of hungry people in their countries.

During the ceremony, the FAO chief also commended 16 countries for having maintained their hunger rates below 5% dating back to at least 1990: Argentina, Barbados, Dominica, Brunei, Darussalam, Egypt , Iran, Kazakhstan, Lebanon, Malaysia, Mexico, Republic of Korea, Saudi Arabia, South Africa, Tunisia, Turkey and the United Arab Emirates. Awards are based on statistics produced by the FAO using data provided by member countries and other international agencies.
Source: The United Nations' Food and Agriculture Organisation (FAO)