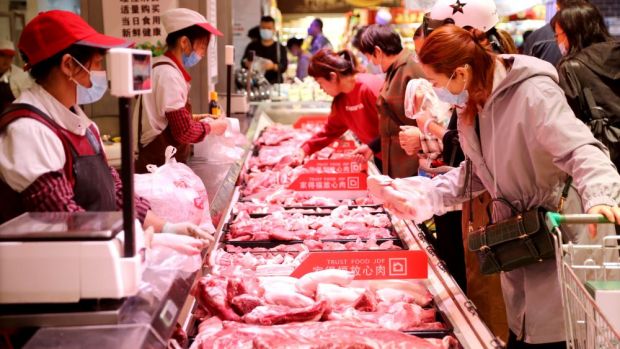 The corona crisis had little effect on meat consumption in China.

CHINA, Beijing. In the first three quarters of this year, the People's Republic of China imported a record quantity of 7.41 mill. t of meat including by-products and paid the equivalent of $23.19 bn. for this.

According to provisional figures from the General Customs Administration, the volume of imports rose considerably compared with the same period last year, namely by 3.11 mill. t or 72.1%; import expenditure rose by $10.5 bn. or 82.6%.

After the production losses due to ASF in their own country, pork was particularly sought after by Chinese importers in the past months; the corresponding purchase quantity without by-products shot up by 132.2% to 3.29 mill. t compared to the first three quarters of 2019. At the same time, beef imports increased by 38.8% to 1.57 mill. t. In addition, growing domestic livestock stocks, especially of pigs, have also increased the People's Republic's demand for soya for animal feed production. Imports of this product increased by 15.5% to 74.5 mill. t from January to September 2020 compared to the previous year.

According to the Chinese Ministry of Agriculture, the number of pigs and the herd of breeding sows has been continuously increased in recent months; in the meantime, a level of 80% of "normal years" has been reached again. According to analysts, the twelve largest listed companies with pigs sold 5.7 mill. animals in September, an increase of 87% over the same month last year. The growing supply of pigs - in combination with high pork imports - has also been reflected in falling producer prices for the past three months. From mid-July to mid-October, the average price of slaughter pigs - based on live weight - fell by 22% across the country to its most recent level of €3.73 per kg. This was the first time since the beginning of June that the price fell below the €3.77 per kg threshold. In contrast, piglet prices have weakened slightly at best.