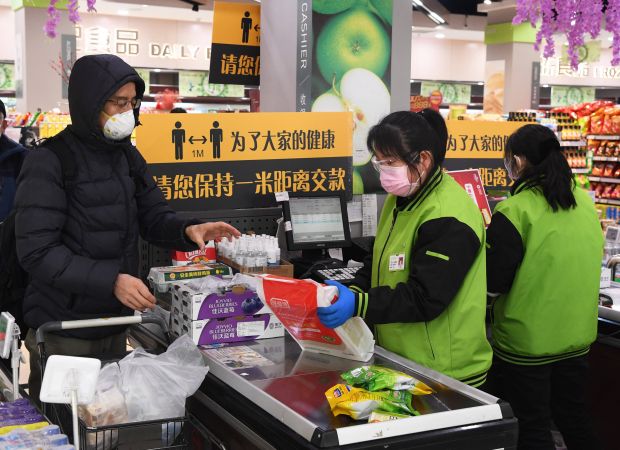 Photo: imago images / Xinhua
According to the statisticians, the rise in food and drink prices accounted for 4.84 percentage points of overall inflation.
Related Topics:

fleischwirtschaft.com — CHINA, Peking. The outbreak of coronavirus has led to a sharp increase in food prices in the People's Republic of China.
Facebook
Twitter

According to the National Statistics Office in Beijing, the general inflation rate for all goods and services was 5.2% in February 2020 compared to the same month last year. The price increase for food and beverages of 16% on average, which excluding alcoholic beverages and tobacco even amounted to 21.9%, played a major role in this development. According to the statisticians, the increase in the price of food and beverages accounted for 4.84 percentage points of overall inflation.

Coronavirus No evidence that food is a source

In addition to the coronavirus, however, the consequences of African swine fever (ASF) continued to drive prices up. For example, consumers had to spend an average of 135.2% more on pork than in February 2019. This alone contributed 3.19 percentage points to the general inflation rate due to the high weighting in the shopping basket. In addition, the Chinese had to pay 21.1% more for beef and 11.2% more for mutton than twelve months ago. All in all, meat prices were an average of 87.6% higher than in the previous year.

According to Beijing statisticians, the main reason for the recent rise in food prices, which rose by an average of 4.3% in February compared to January, was the tighter supply. The measures against the spread of the coronavirus, such as transport controls or the extension of the New Year holidays, had led to logistics problems and production losses, which had affected the supply of some food products.