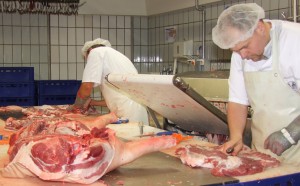 GERMANY, Braunschweig Germany counts as a low-wage country in the slaughter sector

A comparison of the costs and turnover of slaughterhouses in Germany and other EU countries reveals that it is cheapest to slaughter in Germany.

Slaughterhouses in Germany pay their employees a gross salary of EUR 33,700 per year on average. According to EU statistics, this is 17 percent less than in France and 42 percent lower than in Denmark. In the Netherlands and Belgium, too, slaughterhouse employee earnings are, at more than EUR 40,000 per year, significantly higher.

In addition, German and Dutch slaughter companies share relatively little of their performance profits with employees. These were the conclusions drawn by
the economists at the Thünen Institute of Market Analysis in Braunschweig, which also worked out how high the proportion of personnel costs is to the companies' gross earnings.

In Germany and the Netherlands the companies invest less than 60 percent of gross earnings in their employees. In Denmark, Belgium and France the figures range between 73 and 85 percent. A further notable feature of the German slaughter industry is that it deploys a disproportionately high number of temporary staff.

The question of whether Germany is being used as a low-wage country cannot be answered from the statistics. "However, it should be noted that several Danish companies have acquired slaughtering sites in Germany," says Dr. Josef Efken of the Thünen Institute of Market Analysis. It seems reasonable to assume that the low labour costs were one of the reasons behind these decisions.
Source: afz – allgemeine fleischer zeitung 49/2013