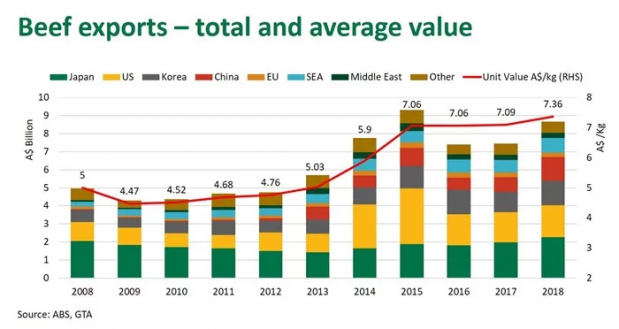 2018 was a year of records, with Australian beef export values to Japan surpassing $2 bn. for the first time since 2008.

AUSTRALIA, North Sydney. On the back of higher slaughter numbers, beef production totalled 2.28 mill. t carcase weight (cwt), up 7% year-on-year. This is despite a decline in average adult carcase weights to 291kg/head (-2%), driven by the female portion of total slaughter increasing.

Shipment values to Japan lifted 14% to $2.27 bn., surpassing the $2 bn. mark for the first time since 2008 and ensuring Japan remained Australia’s largest beef export destination on a value and volume basis.

The value of beef exports to the US totalled $1.75 bn., up 5% year-on-year. Despite total export volumes remaining close to static, export values were supported by robust competition between North Asian and US buyers for Australian manufacturing product. Growth in the premium chilled grassfed category also supported returns.

The value of shipments to Korea increased 25% to $1.37 bn., edging past the previous record set in 2016. Increasing US production and resulting export growth challenged Australia’s market share in 2018 – as was the case in 2017 – however, increased availability from Australia of both grassfed and grainfed product helped drive value gains.

Export values to China surged 56% to $1.29 bn., easily a record for the market. China has transformed from a minor buyer of beef to a global importing powerhouse and the Australian beef industry has been a beneficiary of this expansion. Frozen beef values to China unsurprisingly accounted for 88% of all returns, given the lack of eligible plants approved to export chilled product to China. The value of frozen beef exports to China also made it Australia’s highest value frozen beef market, knocking the US off the top spot.