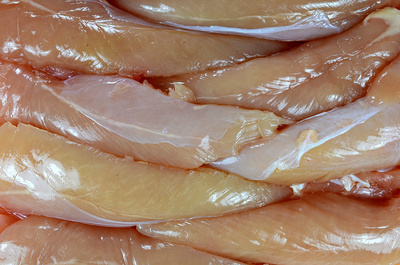 The FSA has published the first set of quarterly results from a new survey of Campylobacter on fresh shop-bought chickens. The results show 59% of birds tested positive for the presence of Campylobacter. In 4% of samples Campylobacter was identified on the outside of the packaging.

Campylobacter is killed by thorough cooking, however, it is the most common form of food poisoning in the UK, affecting an estimated 280,000 people a year. The majority of these cases come from contaminated poultry.

Previous studies carried out into the prevalence of Campylobacter have also shown around two thirds of raw poultry carries Campylobacter.

The 12-month survey, running from February 2014 to February 2015, is looking at the prevalence and levels of Campylobacter contamination on fresh whole chilled chickens and their packaging. The survey will test 4,000 samples of whole chickens bought from UK retail outlets and smaller independent stores and butchers. Today’s results are for the first quarter and represent 853 samples.

'This survey is an important part of the work we are doing to tackle Campylobacter. It will give us a clearer picture of the prevalence of Campylobacter on raw poultry sold at retail and help us measure the impact of interventions introduced by producers, processers, and retailers to reduce contamination.

'The chicken supply chain is looking at how interventions such as improved biosecurity on farms, rapid surface chilling, and anti-microbial washes can help reduce Campylobacter. So when they take action and invest in interventions designed to make a difference, these survey figures will enable us to see if they really do make an impact.

'The low levels of contamination found on packaging, shown in the results released potentially indicate the effectiveness of the leak-proof packaging for poultry introduced by most retailers, which helps to reduce risks of cross contamination in consumers’ kitchens. There is still a lot more to be done by all elements of the supply chain to ensure that consumers can be confident in the food they buy.

The results are in two parts: a figure for the contamination levels on each bird, taken from the neck flap, and expressed as cfu/g (colony forming units per gram), and contamination of the outside of the packaging.

The first quarter results show 59% of birds tested positive for the presence of Campylobacter with 16% of birds tested at this stage of the survey indicating the highest level of contamination of >1000 cfu/g.

To note, 10cfu/g is considered the limit of detection for Campylobacter so only contamination found above that level can be confirmed as a positive. The <10 band includes negative results.
Source: FSA UK