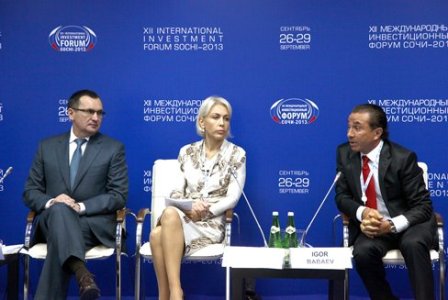 The chairman of the Board of Directors of Cherkizovo Group Igor Babaev spoke at the round table “Agriculture in the New Development Environment: Investment Guidelines for Business and Priorities for Government Support” on September 28 during the 12th Sochi International Investment Forum.

In his presentation, Babaev highlighted a number of challenges facing agriculture today that can only be overcome by effective cooperation between business and government. Babaev said that the government must work faster to redirect private holdings from raising pigs to other animals that do not threaten biological security in livestock breeding.

“The constant threat of the spread of African Swine Fever due to lax enforcement of veterinary standards and the conditions in which pigs are raised on private holdings compromise the development of commercial pork production in the Russian Federation,” Babaev stated. “The government must resolve this issue as quickly as possible, either by buying up the animals or by developing alternative livestock breeding.”

He also reminded Russian Minister of Agriculture Nikolai Fedorov that many agricultural enterprises previously located in Moscow Region are now under the jurisdiction of the Moscow Government as a result of the city’s recent expansion. The city authorities are unprepared for solving the problems of the agricultural industry, which only compounds the difficulties.

Fedorov agreed that the issues Babaev raised were critical and promised to study them carefully.
Source: Cherkizovo