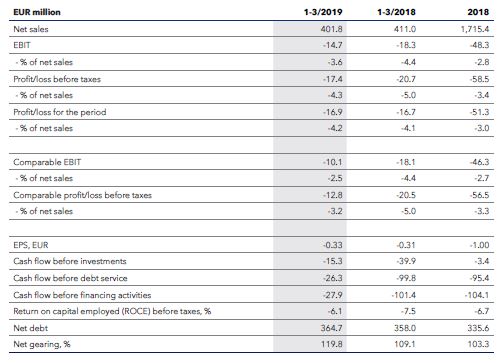 FINLAND, Turku. The report covers 1 January to 31 March 2019 and shows that the company's loss decreased clearly.


Global meat consumption is projected to increase during the coming years. Within HKScan’s home markets, consumption growth is estimated to be led by poultry and meal categories, while demand in other categories is expected to remain stable. The company expects its improvement programmes and other corrective actions to start recording results in 2019 and the company’s comparable EBIT is expected to improve clearly from the previous year.


The first quarter result was negative but improved clearly from the comparison period. The cost saving and development actions started and boosted after the beginning of the year, together with the actions begun last year, started to record results. The most significant factors affecting the improved financial performance were the positive development of their Finnish poultry business and the related Rauma operations.

Pork export from Finland to China proceeded according to plan and the targets for the first year of export will be met. The strong reduction of pork production in China caused by African swine fever has increased the demand of pork in the global market and has a positive impact on the price level of export sales.