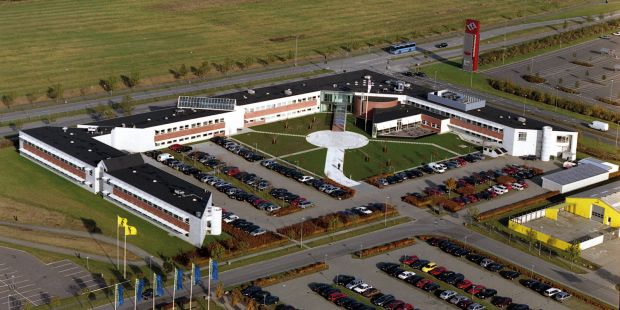 The first step is the transfer of approximately 50 jobs from Randers (Photo) to Krakow in Poland.

DENMARK, Randers. It is almost two years since Danish Crown presented its 4WD strategy, which includes the express target of boosting the price paid for the pigs supplied by its owners by 0.60 DKK per kg relative to an EU index.


Virtually all of the new initiatives announced in November 2016 are now under way, and the Danish Crown management has therefore decided to go one step further in a number of areas.

“We continuously review our strategy, and in three specific areas we have decided to strengthen our efforts as we believe this will benefit the group in both the short and the long term. However, these are not easy decisions to make as it means saying goodbye to a number of employees in different parts of the organisation. At the same time, we are postponing the construction of our new head office, which will no doubt be a disappointment for our employees in Randers,” says Group CEO Jais Valeur.

The plans for a new joint head office for Danish Crown and Tulip Food Company were announced a year ago. The idea was to transform the former sausage factory in Randers into a modern office building with 23,000 square metres of floor space, but these plans are now being put on hold.

“Having Danish Crown and Tulip Food Company move in together still makes a lot of sense, but it will not happen at the beginning of 2020 as originally planned,” comments Valeur.

Until now, the target has been to reduce the costs of procuring everything but raw materials from Danish Crown’s owners by 500 mill. DKK before the end of the 2020/21 financial year. This target has now been raised to 650 mill. DKK.

“We have established a new procurement organisation, and our specialists have identified significantly higher potential savings than were originally estimated in our strategy process. These are not savings which we can realise overnight, but the process has confirmed that we were right to invest in new procurement expertise, and this is the reason why we are raising our target,” explains Group CFO Preben Sunke.

As part of the 4WD strategy, Danish Crown will in the coming years bring together, standardize, and automate a number of administrative functions in a new Global Business Services centre in Poland. The first step is the transfer of approximately 50 jobs from Randers to Krakow in Poland.

“This will bring benefits in relation to serving our customers as well as delivering specific savings. However, it is a complicated operation, and it is therefore important for us that the project is rolled out at a pace which is not going to adversely affect our business. The whole process is therefore expected to take two to three years,” adds Sunke.

Once fully implemented, the transfer is expected to generate annual savings of around 40 mill. DKK, which will contribute to realizing the strategic target.