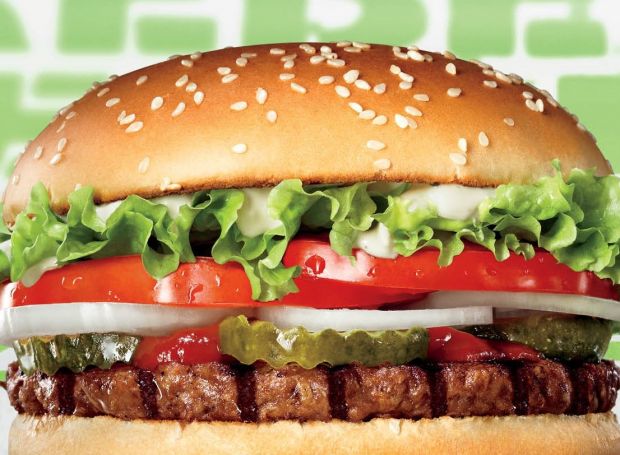 The restaurant chain's unveiling of the Rebel Whopper followed the successful launch of its Impossible Whopper in the US last year.


The restaurant chain's unveiling of the Rebel Whopper followed the successful launch of its Impossible Whopper in the US last year, developed by Silicon Valley start-up Impossible Meat.

Developed in partnership with Dutch plant-based meat producer The Vegetarian Butcher, the burger has been positioned as an alternative to Burger King's regular Whopper for flexitarians – unlike the restaurant's other meat-free offerings, the Rebel Whopper is not suitable for vegans, due to it being cooked in the same broiler as its meat products and containing mayonnaise.

Speaking at the launch of the new burger, President David Shear said: "We are confident that the Rebel Whopper is the sandwich everyone has been waiting for and provides the ultimate plant-based patty alternative with the iconic Whopper build. I'm excited to let the Rebel Whopper do the talking and see whether our guests can tell the difference!"

The launch of the Rebel Whopper is reportedly the largest in Burger King's history and will see it become one of the largest restaurant chains to offer a plant-based patty in Europe.

The Vegetarian Butcher founder Jaap Korteweg added: "When I started The Vegetarian Butcher nine years ago, my goal was to be the biggest butcher in the world – to create products for meat lovers, with the ambition of providing the same taste and experience, but plant-based. Working with Burger King on the Rebel Whopper has been amazing, and we can't wait for all Burger King guests to enjoy it."

Unilever acquired The Vegetarian Butcher in December last year as part of its strategy to expand its portfolio into plant-based foods that were healthier and had a lower environmental impact – which had been accelerated, thanks to the Burger King deal.

Hanneke Faber, president of Unilever Foods & Refreshment, said: "Less than a year after acquiring The Vegetarian Butcher in the Netherlands, we are excited to partner with the iconic Burger King brand across Europe. The new Rebel Whopper, powered by The Vegetarian Butcher, offers meat-lovers a fabulous meat-free experience; and we can't wait start to realising founderJaap Korteweg's dream of becoming the largest butcher in the world."