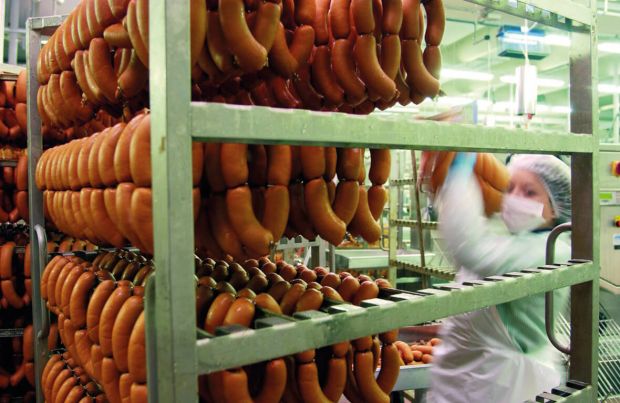 Bell announced its decision to sell its German sausage business in June 2019.

SWITZERLAND, Basel. The first half of 2019 was dominated by the sharp increase of raw material prices for meat in Europe, the organisational restructuring of Bell Germany and unfavourable weather conditions. At CHF 2.0 billion, adjusted sales revenue for the Bell Food Group was on a par with the prior-year period.


At CHF 2.0 billion, the Bell Food Group's sales revenue adjusted for foreign currency, acquisition and restructuring effects for the first half of 2019 was on a par with the prior-year period. At 266.7 million kilograms, adjusted sales volume was up 2.2 percent on the previous year. The share of convenience products of the Bell Food Group's total sales revenue improved by around one percentage point to 27 percent.

Gross profit dropped by CHF 3.4 million to CHF 768.2 million. This includes the substantial increase in raw material prices for Bell Germany and Bell International, which depressed the gross profit by some CHF 6.0 million. Thanks to efficient cost management, personnel and overhead costs remained stable in operational terms year-on-year. At CHF 116.8 million, EBITDA for the first half of 2019 was down CHF 19.8 million on the same period in 2018. This includes pro rata one-off costs of CHF 10 million for the withdrawal from the German sausage market.

At CHF 982.0 million, Bell Switzerland's sales revenue contracted slightly year-on-year (CHF –13.5 million, –1.4 %). This decline is mainly due to the retail sales channel, which suffered a general contraction in 2019. Bad weather also meant a slow start to the barbecue season. At 61.7 million kilograms, sales volume was down 2.1 million kilograms (–3.3 %) on the prior-year period.

The measures implemented in the previous year led to substantial improvements in the result for the first half of 2019. In spite of the contraction in the retail segment, gross profit improved, not least because of a further increase in domestic meat production. Combined with efficient cost management, Bell Switzerland managed to considerably improve its overall result on the previous year.

Because of the conversion of the Bad Wünnenberg facility and a contracting retail market, Bell Germany's sales revenue of CHF 197.3 million was 22.0 percent less than in the previous year. Sales volume dropped by 11.4 million kilograms (–30.5%) to 25.9 million kilograms. This includes the loss of the Bad Wünnenberg volume as well as the deliberate exclusion of low-margin air-dried ham products.

The Bell Food Group announced its decision to sell Bell Germany's sausage business on 24 June 2019. In future, business in Germany will focus on expanding the Group's position in the segment for top-quality German and international air-dried ham products.

The new production plant for Serrano ham in Fuensalida near Madrid was commissioned as planned in the first half of 2019. Together with the existing plant in Casarrubios del Monte, Bell now has the capacity to produce more than one million Serrano hams per year. The production facility in Bad Wünnenberg is being converted into a plant for fresh convenience products during the course of 2019.

Bell International generated sales revenue of CHF 329.0 million, which is 3.8 percent or CHF 12.1 million more in currency-adjusted terms than in the previous year. Sales volume increased by 2.6 million kilograms (+3.2%) to 83.5 million kilograms in the first half of 2019.

The measures to improve the results for Hubers' poultry business that were announced at the time of publication of the 2018 financial statements have also demonstrated their effects.

In the first half of 2019, sales revenue for the Convenience business area increased by CHF 33.2 million to CHF 548.9 million. Sales volume improved by 7.7 million kilograms to 99.4 million kilograms, partly because of the full-year effect of Sylvain & CO, which was taken over in May 2018. The Eisberg, Hilcona and Hügli divisions also continued to post organic growth. All three divisions benefited from the growth in retail and food service sales to their most important customers. Eisberg's new facility in Marchtrenk (AT) took up production in the first half of 2019.

As the Bell Food Group expects raw material prices for pork to remain high in 2019, we aim to increase prices further in the second half of 2019 and intend making additional operational progress in all business areas. The focus also falls on the commissioning of the new production plants, the conversion of the Bad Wünnenberg facility and the sale of the German sausage business.