How the Belgians tick 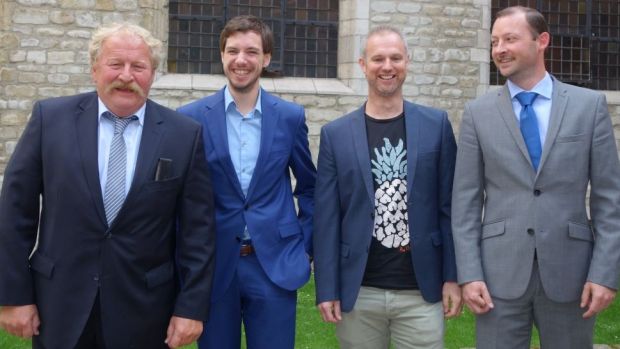 In a good mood because of the popularity of Belgian meat at home and abroad were (from left): BMO manager René Maillard, sociologist Filip Degreef, and the marketing managers Kris Michiels and Joris Coenen of the Belgian Meat Office (BMO).

BELGIUM, Brussels. This was the twelfth Round Table of the Belgian Meat Office (BMO). The discussions in Brussels centred on Belgian eating habits and on the strength of Belgian meat exports. In addition, specialist journalists from seven countries came to the European capital to talk with BMO Manager René Maillard and his team.

Our western neighbours are very fond of their meat. "Belgians are carnivores," declared BMO Marketing Manager Kris Michiels. 60% of Belgians consume meat four times per week, with 25% eating it daily. The per capita consumption of meat is estimated at 19 kg for 2016. Added to this are ten kilos of poultry and game. Fish is on the menu once a week for roughly 20% of the population, The consumption of fish and seafood amounts to six kilos per capita per year. About 20% have a meat-free day once a week. Vegetarian meat substitutes account for a total of 300 grams per person per year.

The Belgians cite many reasons for eating meat. Principal among these are the familiar taste, the easy preparation and ready availability at reasonable prices. Nevertheless, the amount being consumed is falling from year to year. The shopping frequency of the Belgians is also decreasing. A study conducted by GfK Belgium surveyed 5,000 households on their shopping habits. 38% of the respondents stated that they were consuming less meat in comparison to the previous year. 28% want to reduce their meat consumption further in the future. 25% of the respondents are content with their consumption habits.

Why is that? Kris Michiels explained that the debate in Belgium about what constitutes a good diet is influenced by the topics of health, environmental impact, price structure and animal welfare. Consumption is falling as a result. Unseen risks unsettle consumers, explained scientist Filip Degreef of the Free University of Brussels. In the case of pork, for example, it is impossible to see whether antibiotics have been administered or not. Also, the killing of animals remains a problem for many consumers, not least because food is now produced out of sight of most people. As in Germany, it is the taste of meat which leads consumers to buy beef and pork. "Belgian meat connoisseurs don't like the taste of the substitutes. That's why meat-free alternatives remain niche products," said Kris Michiels.

The Belgians export half of the total of 1.1 mill. t of pork (2016) they produce, explained BMO Manager Joris Coenen. 88% of the export volume is supplied to the EU internal market. The largest customer remains Germany with a share of around 300,000 t, ahead of Poland. Asked about the huge demand for meat from China, Coenen said: "China will remain a significant buyer of EU goods." He expressed concern about the steadily encroaching African swine fever.