Celebrating the reopening of beef market 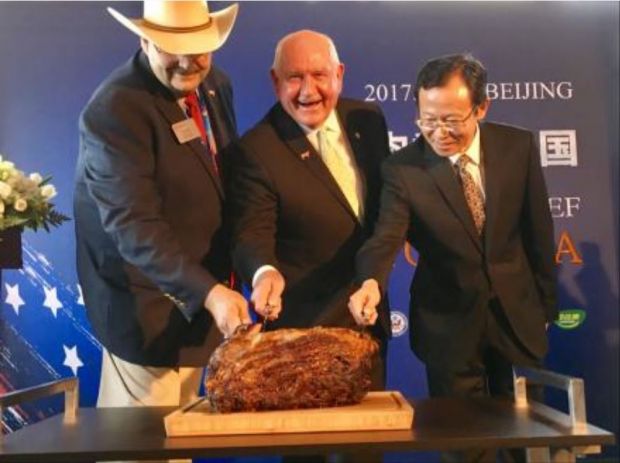 CHINA, Beijing. US beef is back in China after a 14-year hiatus and senior meat figures including agriculture secretary Sonny Perdue marked the occasion in quintessentially American style: by eating a giant steak.


US Department of Agriculture (USDA) Secretary Sonny Perdue was the highest-ranking official at an event in Beijing, China, marking the first return of US beef to the country since a 2003 case of Bovine spongiform encephalopathy (BSE). National Cattlemen’s Beef Association (NCBA) president Craig Uden and vice president of the China National Cereals, Oils and Foodstuffs Corporation (COFCO) Luan Richeng joined Perdue in slicing a beefy cut of prime rib.

NCBA president Uden said that while regaining Chinese market access was a massive step forward, he warned the government to not “mess up” talks on other global trade deals that could weaken the US beef position.

After the ceremonial cutting of US prime rib – part of the first shipment of US beef to arrive in China – Perdue travelled to Shanghai to launch beef in China’s commercial channels. Joining him was Greg Ibach, director of the Nebraska Department of Agriculture, and Joel Haggard, US Meat Export Federation senior vice president for Asia Pacific, who helped launch a US beef promotion at Chinese retailer City Super.