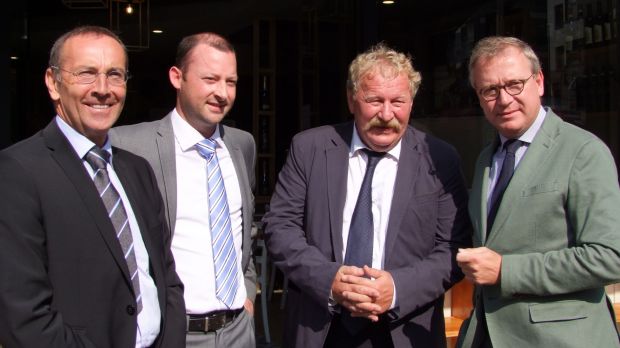 ITALY, Milan In light of the crisis in the European pork markets, the private company Westvlees and the cooperative-based Covalis group are joining forces from September to form the Belgian Pork Group.


Roughly 20 journalists from Europe met in Milan for the tenth round table talks organised by the Belgian Meat Office (BMO). The summit meeting of the Belgian meat sector, held at the World Expo with its theme of "Feeding the Planet, Energy for Life", was organised at the request of BMO chief René Maillard.

Belgium intends to continue to play an important role in the production of pork and beef in the future. The Russian embargo is hitting the Belgian abattoirs and cutters hard. Maillard said that the slowing of the Chinese market and "the renationalisation of the meat market in Germany" are giving cause for concern with regard to the country of origin labelling policy for the sale of meat. This conflicts with the European idea of a common internal market. Over the last ten years the export share of pork has declined from 50 to 34 per cent, although the volume has remained unchanged. Thus, Germany remains a key exporter. All European countries are dependent on exports and now need to tap into new markets such as Japan, Korea, Malaysia, and the Philippines. What the BMO Chief now believes is necessary is a quality strategy for all meat-related goods, and not only by-products.

By merging to create the Belgian Pork Group (BPG), the two companies Covalis and Westvlees are looking to improve their position in the market in the future. The heads of the companies are expecting the Belgian authorities to grant approval by 8 September. The merger brings together Westvlees, a family business headed by Jos Claeys, with the cooperative-based Covalis group. Its CEO Luc Verspreet explained that he wanted to create something new. 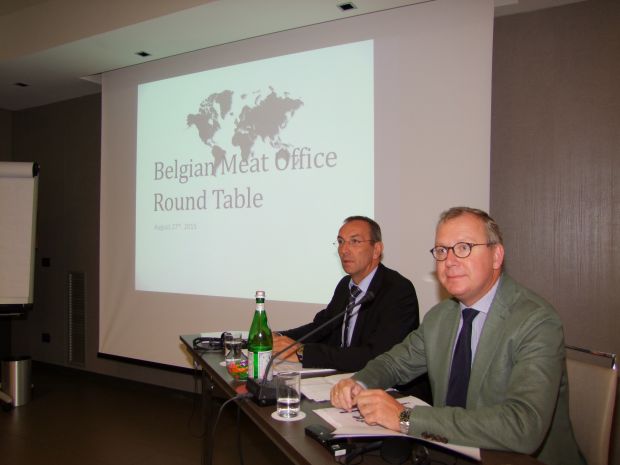 jus, jus
Luc Verspreet (left) and Jos Claeys at 10th BMO Round Table.
Together, the BPG will slaughter 4.2 million pigs per year and enjoy a 34 percent market share in Belgium. "We need to be strong if we are to impress our consumers and partners," said Covalis CEO Verspreet at the round-table discussion. The same applies to the new group's relationship with farmers. The intention is for these to subscribe shares in the new company and become stakeholders. Around 700 livestock farmers currently work together with Westvlees.

The Covalis NV cooperative recently invested heavily in its two slaughterhouses in Hoogstraten and Wijtschate, spending just over 60 million euros. All sites are to be retained under the new group. The aim is not to lose any customers or suppliers, explained Verspreet. The Belgians are looking to maximise their chances in the competition by operating the very latest slaughtering and cutting facilities, as well as deploying extensive automation.

In addition, the new "network" as Claeys and Verspreet call the BPG, is working to optimise distribution structures for the meat products industry and the food trade. 50 percent of the pigs are delivered to customers as halves or pre-cut. The new group now wishes to expand the portfolio of convenience and self-service meat products. To this end, the BPG is investing in market research to find out what consumers want.