Austrian team winner of the International Yo... 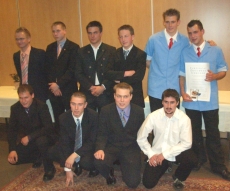 Gerald Moser from Austria is the winner of this year’s International Young Butchers’ Competition. The second place goes to Florian Gstach from Austria also, and the third place to Jérôme Dubiez from France. The two Austrian candidates totalize together the highest team score and they win, as a team, for Austria. Thus, the trophy offered by the country that organised the competition in 2001 in Gap, France, a wooden statue of a butcher, went, after a stay in Germany (2001 and 2002), in France (2003), in Austria (2004) and in Germany (2005) again to Austria.

The International Young Butchers’ Competition, a yearly event of the Interna-tional Butchers’ Confederation (IBC) took place this year in the modern and spacious facilities of the Professional School Ter Groene Poorte in Bruges, the “Venice of the North”. Interested visitors and representatives of the media could follow the competition live.

10 young butchers from five countries – Belgium, Germany, France, Austria and Switzerland – demonstrated not only their professional know-how, but also their creativity during 2 days in five different disciplines. Most of them have been qualified for the competition as a result of their success in national contests.

The Belgian Jules Van Poel, President of the internationally consisted jury ex-pressed his satisfaction with each participant’s competition’s work. According to him, the candidates impressed by the diversity of their qualification in the bon-ing, rough and fine cutting of the beef pistola, the preparation and the presenta-tion of barbecue specialities, of 3 dishes of the day with items ready for the kitchen and/or the pan and finally of a main course with lamb.

During the presentation ceremony, the two Presidents of the organising Belgian butchers’ federation, Willy Verbust (Flanders) and Joseph Walravens (Wallonia), underlined that this year’s competition again considerably contributed to a professional exchange especially within the new generation of European butchers. IBC President Eugen Nagel and the Secretary General Martin Fuchs thanked the organising Belgian federation for the excellent way they took care of the competition.
Source: afz – allgemeine fleischer zeitung 24/2006