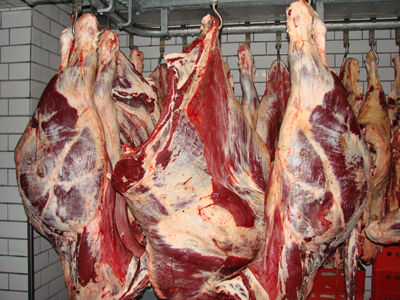 Following Meat and Livestock Australia (MLA) the Australian beef production record is likely to reach a new high in 2014. Adult cattle slaughter during August was again at extremely high levels (up 9% year-on-year) at 796,900 head, fuelled by the ongoing, spreading drought conditions.

For the year-to-August, adult cattle slaughter was in excess of 6 mill. head, 10% above last year's highest kill since 1978.

Across the states, proportionally, NSW (170,400 head) and Victorian (168,000 head) adult cattle slaughter were the highest, up 14% and 15% year-on-year, respectively. Driving these significant increases was the below average winter rainfall registered in the Riverina and northern Victoria. Queensland slaughter was again higher, at 370,500 head, while South Australia and Western Australia slaughter were up 6% and 4% respectively, each at around 35,000 head.

Focusing on the breakup of the adult cattle kill during August, females accounted for over half, at 421,200 head, taking the year-to-August total to 3.17 mill. head. Given the incredibly high rate of female kill for the duration of 2014, and a large portion of last year, the breeding nucleus has contracted considerably from the highs of 2012.

While slaughter has been surging, so too has beef and veal production, with the 224,890 t cwt in August pushing the total for the first eight months of this year to 1.7 mill. t cwt - 10% above where the 2013 record was for the same period.
Source: Meat and Livestock Australia