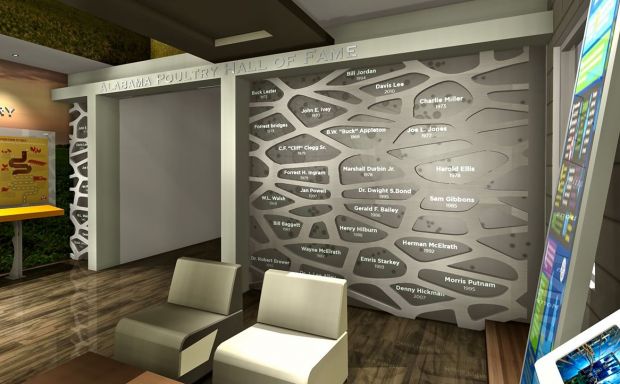 USA, Auburn, Alabama. An 8,000-square-foot administrative and education facility scheduled for completion at Auburn University’s Charles C. Miller Jr. Poultry Research and Education Center in early 2018 will be the permanent home of the Alabama Poultry Hall of Fame, Auburn College of Agriculture and Alabama Poultry & Egg Association officials have announced.

The Miller Center is a multi-facility complex north of Auburn’s main campus. The poultry hall of honor will be an interactive digital showcase located in the visitors’ center of the new flagship building.

“Through this display, we will be able to feature the past, present and future of the poultry industry in an interactive and dynamic manner,” said Johnny Adams, executive director of the Alabama Poultry & Egg Association. “In doing so, we will have the unique opportunity to fully capture and preserve the stories of these industry pioneers for future generations.”


The hall of fame currently honors 53 innovators, entrepreneurs, educators, researchers and visionaries who have been instrumental in advancing the Alabama poultry industry, which today contributes more than $15 bn. annually to Alabama’s economy and is the largest agricultural industry in the state. Nationally, Alabama is the second-largest poultry-producing state.

When the administration and education building opens in early 2018, the Miller Center complex will be 50% percent complete, said Auburn Department of Poultry Science Don Conner.

Development of the Center began on the North Auburn campus in 2016, supported by a $2.5 mill. gift from Miller Jr.’s son, Charles C. “Buddy Miller III, and daughter-in-law Pinney Allen. The complex sits on 30 acres and currently encompasses the poultry and animal nutrition center and feed mill that opened on the site in 2012 along with three new units—one that houses the Auburn-based National Poultry Technology Center and two floor pen facilities that accommodate replicated broiler trials in poultry nutrition and management research.

Educational activities at the Miller Center have included workshops and seminars for industry professionals and student academic programming through the poultry science department. A hatchery, a poultry processing plant and teaching labs are among future Miller Center facilities that will be built as funding becomes available.

The Hall of Fame exhibit at the Miller Center is a partnership between the Alabama Poultry & Egg Association and Auburn’s Department of Poultry Science.