German Meat to the world 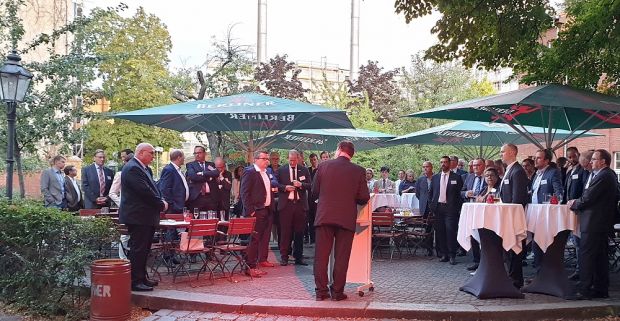 The tenth anniversary of German Meat was a good time to thank the numerous comrades-in-arms from companies, associations, embassies, chambers of foreign trade and politics. State Secretary Hans-Joachim Fuchtel promised further BMEL involvement in the removal of market access barriers.

GERMANY, Berlin. German Meat, founded in April 2009 by the German Meat Industry Association (VDF) as a private export promotion organisation for meat and meat products, is on course for success. This was not a self-runner, because after the end of the CMA there were parallel political and economic approaches to continue the joint support of companies from the agricultural and food industries on foreign markets, after millions of export promotion programmes from the sales fund were no longer available from now on.


With its initiative, the meat industry was the first organisation to draw sustainable conclusions only a few weeks after the CMA-destructive ruling from Karlsruhe. The entire chain of meat production is now reflected in the shareholder structure of German Meat GmbH. The German Farmers' Association and the Federal Association of the German Meat Industry (BVDF) were involved right from the start.

For seven years, the poultry industry with the Federal Association of Poultry Slaughterhouses has also been part of it. Over the past ten years, export promotion projects have been implemented in 39 countries - from market opening to trade fairs and business trips, as Bernd Wirtz, Chairman of the Advisory Board of German Meat, pointed out on the occasion of the anniversary celebrations in Berlin.

"This cannot be achieved alone, and without the state it is impossible", emphasised Wirtz and referred to the importance of good networking with partner organisations at home and abroad and the close cooperation with associations, embassies, chambers of foreign trade and not least with the Federal Ministry of Food, Agriculture and Consumer Protection (BMEL), which negotiates and concludes market access conditions with third countries with its veterinarians. Wirtz' special thanks went to the Parliamentary State Secretary Hans-Joachim Fuchtel, who in his own diplomatic way had just made an impression on the delegation during their trip to China.

In his welcoming address, Fuchtel made an unreserved commitment to exports and showed no understanding for the social debate in Germany, which cast doubt on the necessity of trade between the states. The enormously high reputation of meat "made in Germany" was in contrast to this. In hardly any other country in the world are the standards in the areas of animal welfare, food safety and environmental protection higher and better controlled. Germany thus has a special responsibility.

Andreas Schweiger of Müller Fleisch and Thomas Henseler of Heidemark underlined this position from the company's point of view in an interview with Dr. Heike Harstick, who manages German Meat's business with Steffen Reiter. Her conclusion: Without export, there would be no optimal utilisation of the animal in view of German consumer preferences and thus no satisfactory added value in meat production.