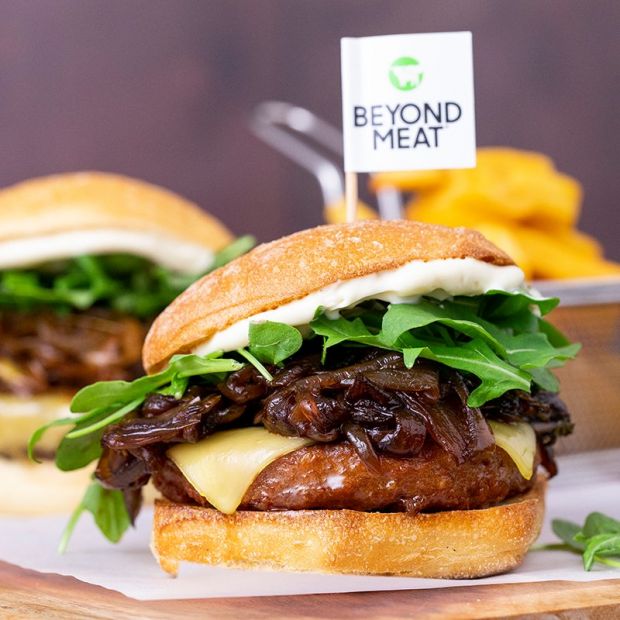 USA, New York City. It may not be as frenzied as the crypto and pot trends, but the veggie burger stampede is in swing. After Beyond Meat Inc.’s stunning trading debut, companies are rushing to get their alternative-meat products to market.


Tyson Foods confirmed it will introduce a meatless protein product in coming months. The company is the biggest meat processor in the US. McDonald’s just began selling a veggie burger in Germany, Burger King said that its Impossible Whopper would go nationwide this year. In July, Whole Foods will start selling a burger made by Lightlife, a competitor to Beyond Meat.

Bloomberg Intelligence predicts the Beyond Meat success will push companies like Kellogg Co., Conagra Brands Inc. and Kraft Heinz Co. to spend more on plant innovation.The stampede could, of course, turn into a bubble and end up looking like the dot-com bust. But after years of being the province of startups and tinkering by Silicon Valley biologists, fake meat has now gone mainstream.

It’s happening because imitation meat-makers like Beyond Meat and Impossible Foods are engineering veggie burgers that are more acceptable to the masses, but it’s also about the masses changing their tastes and trying to eat less meat. Indeed, there are signs of a shortage of elite veggie burgers to satisfy consumers at the moment.

Tyson Foods’ rapid move from investor to player in the alternative meat space is “a good indication that the hot market of vegetable-based proteins will see additional players in the sector,” said Will Sawyer, lead animal protein economist at CoBank. The meat giant sold its 6.5% stake in Beyond Meat just before the initial public offering. “That’s a very quick evolution for a company that has had a very traditional animal-protein business for decades to now expand their products in a way that we wouldn’t have expected 10 years ago,” Sawyer said. “They won’t be the last meat company in the industry that will try to participate.”

Tyson’s timing happens to be perfect for summer grilling. So it is with the new Lightlife burger, which is owned by Canadian meat giant Maple Leaf Foods. According to a release, Lightlife will be available in the meat aisles of thousands of US grocery stores, and is coming to Whole Foods starting in July.

McDonald’s began selling a veggie burger in Germany - the heart of meat consumption - that’s made by Nestle SA. In its home market, the world’s biggest restaurant company’s plans for a beef alternative aren’t quite as clear. While Chief Executive Officer Steve Easterbrook says McDonald’s teams are taking a look at plant-based proteins, they could create complications in the kitchens.

Consumer trends, including health and wellness, animal protection and environmental concerns, continue to gain traction, aiding sales growth prospects for plant-based meat substitutes. Millennials are driving this trend, and growing disposable incomes allow them to spend in support of their beliefs.

In the US, there’s a shortage of Impossible burgers, which uses a genetically modified concoction from soy plants and yeast to imitate cattle blood - all to more perfectly mimic the taste of flesh. They’re sold at thousands of locations including at White Castle and Burger King. While veggie burgers have long existed, the ones that are garnering much of the investment are highly engineered alternatives that aim to taste as good as meat. But there’s also a flourishing of the lower-end stuff as retailers offer their own private label plant burgers.

Grocer Aldi is getting into plant-based proteins with vegan burgers under the Earth Grown brand that are much cheaper than Beyond’s burgers, which cost $6 to $7 for two, 4-ounce patties. The Aldi Earth Grown vegan burgers were introduced last year, and are just $2.79 for a 10-ounce package of four patties, the company says. To be sure, alternative meat is still tiny compared with animal-protein markets - less than 1% of animal-protein sales, according to Sawyer. But some people see the makings of a bubble.

“It’s crazy, there are companies like in a one-car garage to large companies that see the markets changing by the attitude of the millennials,” said Henk Hoogencamp, a board member and adviser for several food companies, including the alternative dairy protein startup, Perfect Day. “Some of them will succeed, and most of them will fail.”

Not every vegetable-based burger has succeeded. Wendy’s Co. a few years back tried selling a black-bean burger, but it never really took off. There was substantial customer interest in some areas, but not in others, said spokeswoman Heidi Schauer. Big food companies are “setting up investment arms and emerging company areas, but it’s too little, too late, and they’re still trying to catch up with the curve,” said Lou Biscotti, national food and beverage practice leader for Marcum LLP, an accounting firm.