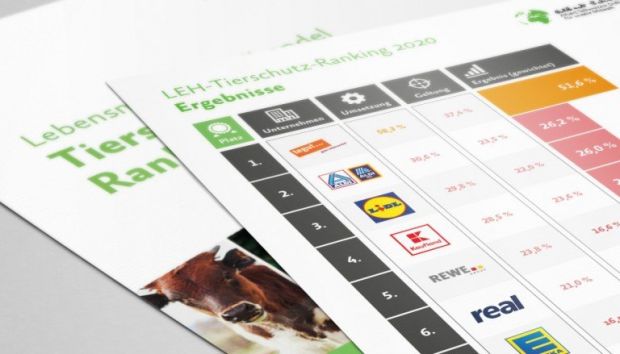 GERMANY, Berlin. The Albert Schweitzer Foundation for our environment has for the first time evaluated in detail the animal welfare standards in food retailing. The foundation presents its results in a ranking: Tegut takes first place with a good 51% of the possible points, followed by Aldi, Lidl and Kaufland by a large margin.

"We are noticing a clear tendency towards more and better animal protection measures, but there is still a lot of room for improvement overall," summarises Mahi Klosterhalfen, President of the Foundation. For the ranking, the foundation examined the animal welfare guidelines of eleven major German food retailers. The companies were able to collect points in a total of 14 subject areas. One focus was on twelve groups of animals and associated problem areas such as " farrowing crate" and " ie-stalls". Higher-level topics such as the improvement of the retail trade's labelling  in case of "animal husbandry form" were also taken into account.

The results initially show a positive trend: "The fact that many retailers have published animal welfare guidelines in recent years is encouraging," says Klosterhalfen. "However, there is usually a lack of concrete plans to end the most cruel practices in livestock farming. Due to their enormous purchasing power, companies can significantly influence how animal welfare standards are designed on a broad scale".

According to Christian Leuthner, Head of Purchasing Meat, Sausage, Fish and Dairy Products, animal welfare has a long tradition at the top-ranked retailer Tegut: "First place in the animal welfare ranking confirms our path, on which we have already achieved a great deal thanks to our farmers and customers. There is still more to be done to strengthen animal welfare - we gladly accept this challenge".