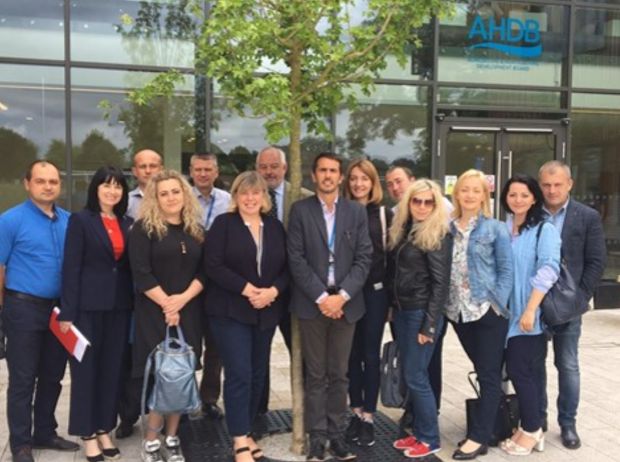 THE UNITED KINGDOM, Warwickshire. A group of government officials arrived at Stoneleigh Park on Tuesday as part of a five-day fact-finding mission to learn about meat hygiene controls and food traceability in the UK.


Organized by the International Finance Corporation, the visit also included meetings with the Department for Environment, Food and Rural Affairs (Defra), the National Farmers’ Union (NFU), the Animal Plant and Health Agency (APHA) and Red Tractor.

During their visit to the AHDB offices, the delegation heard from Senior Veterinary Manager Mandy Nevel about AHDB’s ongoing work in the red meat sector, which included an update on the UK pig sector’s antibiotic usage.

The delegates were presented with the latest figures which show the pig industry reduced antibiotic usage in the UK by 28% in 2017, bringing the total reduction in two years to more than 50%.

And they were introduced to the electronic medicine book (eMB) which was developed by AHDB Pork and the Veterinary Medicines Directorate, allowing producers to record and monitor their on-farm usage.

“The visit from the delegation of food safety specialists gave us an opportunity to highlight the important work being done by AHDB to reduce the use of antibiotics in the pig industry as part of the UK’s ‘One Health’ approach to  tackle the growing threat of antimicrobial resistance,” said Mandy. “Discussion was also had around other emerging diseases, including the spread of African Swine Fever.”

AHDB International Market Development Director Dr Phil Hadley added: “The opportunity to exchange with overseas Government bodies on food safety and animal health gives us the opportunity to showcase the UK position as a world leader in the field, highlighting our standards and growing the reputation of UK products.”