A treat for the eye and the palate

A treat for the eye and the palate

by Editor fleischwirtschaft.com
Monday, May 06, 2013 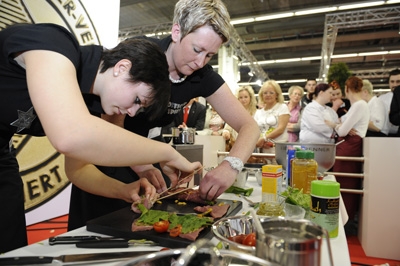 Deputy Vice Chairman Jochen Merz compered the show. Under the watchful eyes of the jury consisting of chefs Bernd Trum and Enrico Steuer of the Front Cooking Akademy and Claudia Banse of the hr TV channel representing the consumers, the front cooking butchers were put through their paces.

Each team of two had 20 minutes to select the foods, herbs and spices and cooking utensils and to prepare the dishes. In the following 15 minutes the professionals then treated the rapt audience to a cooking demonstration of their own wok recipes. It was up to the teams themselves to decide which steps went into the preparation and which were included in the part intended to entertain and engage with the audience. The teams competed one after the other, with the order being decided by drawing lots.

A great deal of importance was attached to the criterion of audience interaction. This was because the information provided on the preparation and the illustration of the cooking process combined with the charm and humour of the chefs are crucial factors in successful demonstration cooking. Further factors in the overall assessment included time management, creativity, work flow and team work, technique, aesthetics, taste and plating.

While the chefs sweated and gave their all, the audience could simply sit back and enjoy the demonstration. The samples given out during the cooking and afterwards were a treat for both the eye and the palate. Overall a mouth-watering variety of dishes were prepared:

these included meat sushi from the women's "FBI team" of Nicole Jansen and Kerstin Spieß who opened the competition, the Croatian speciality Muckalica served by Matthias Hildebrandt and Silvia Knieling (the "Cooking with love" team), a classic Asian wok creation from the "French Connection" team of Katharina Koch and Sebastian Brasseur, and a dish featuring marinated and flambéed beef in lemon-chili sauce from the "Veggie Slayer" team of Sabine Noll and René Johann.
Source: fleischwirtschaft.com; Frankfurt daily