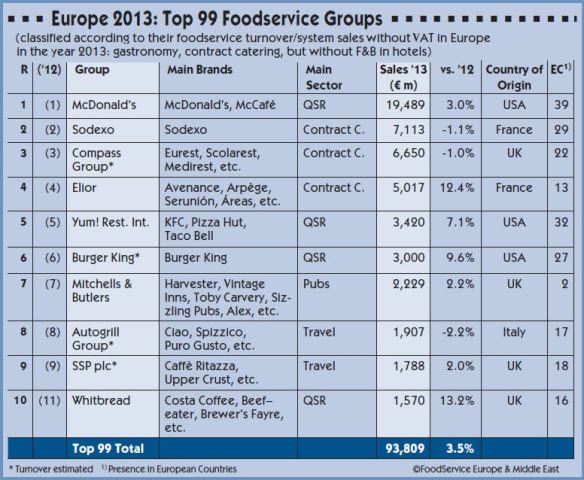 Two sectors are dominant, namely quickservice and contract catering. A decrease in sales occurred only in the travel sector (–0.6%), best growth figures for the QSRsegment (+5.2%). The research was carried out by Gretel Weiss and Michaela Block (FoodService Europe & Middle East).

Especially in Greece, Italy and Spain there are still very difficult economic conditions. Boom time in Russia. Looking back: in 2009 there was the lowest growth rate of the entire noughties with 1.7% for the top operators. As opposed to this, the year 2007 had the best development – more than 8%.

Although the ranking is focussed on the biggest players in Europe, no less than 28 out of the Top 99 make their money in just one country. And it has to be mentioned that 13 out of these 28 are British players.

In the ranking, the industry is organised in 6 segments (companies doing many different things are categorised by their main business field): QSR, restaurants, contract catering, travel, in-store and pubs.

The figures are based mainly on annual reports and information supplied by the companies on request; estimates are marked accordingly. The ranking makes no claim to be complete– the challenge is to provide an overview of the continent as a whole. 2013 was characterised by the following currency fluctuations: a less stronger Swiss Franc and US-Dollar and yet again, a weaker British Pound. This means, for example, that CHF100 mill. was worth € 63 mill. in 2008, € 72 mill. in 2010 and now € 81 mill..

To make our list as transparent as possible, growth rates reported from companies based outside of the Eurozone are shown in constant-currency-terms. Otherwise, it would mainly reflect the monetary ups and downs. What is supposed to be examined, however, is operating performance.
Source: FoodService Europe & Middle East